With a global rebound afoot, MENA energy investments will grow in 2021-2025, Apicorp says 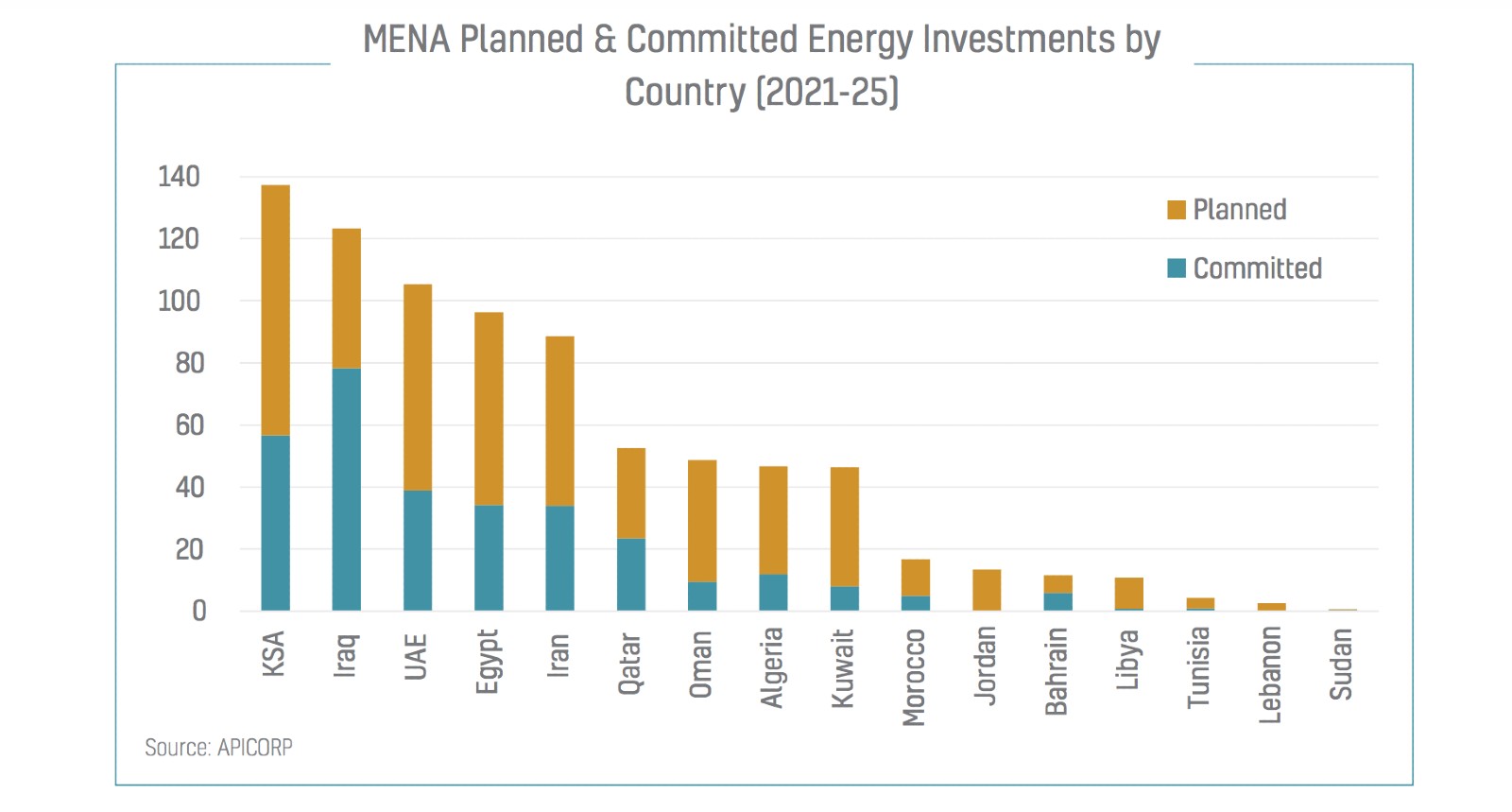 Why MENA’s energy investments will grow in 2021-2025, according to Apicorp: The MENA region is expected to see a combined USD 805 bn of investments in energy projects over the next five years, multilateral development bank Arab Petroleum Investments Corporation (Apicorp) says in its latest MENA Energy Investment Outlook. This forecast is a “modest” increase of USD 13 bn compared to Apicorp’s 2020-2024 outlook, which penciled in USD 792 bn of investment.

What’s behind the growth: The report attributes the uptick in energy investments in part to the recovery of the global economy as we could see “wide-scale access to vaccines” as early as 2021.

Remember that commodity supercycle we’ve been droning on about? It’s going to play into the recovery: Higher commodity prices and exports will help push regional GDP to grow 4% in 2021 and 3.7% in 2022, the report says, with commodity prices helping some countries — including Algeria and Iraq — more than others.

Also spurring more investments: Apicorp also points to the resumption of global energy demand, fast-paced growth in renewables in the region, and Libya reopening its energy projects after the country formed a unity government as key drivers of growth in regional energy investments.

The devil is in the details: Although total investments are up in absolute terms, signaling a certain degree of resilience in MENA’s energy sphere, the 2020 downturn makes its presence known through the ratio of committed to planned investments, which “fell to its lowest level over the past three five-year outlook periods,” the reports says.

Where does Egypt stand? Overall, Egypt has a “healthy pipeline” of energy investments as we make our way through 2021 on good fiscal footing, according to the report. This pipeline is underpinned by the creation of the East Med Gas Forum, resuming LNG exports from the Damietta liquefaction plant after eight years in hibernation, as well as “solidification of its energy transit/trade status with SUMED and Al-Hamra Port expansions, petrochemicals development ambitions … and new infrastructure megaprojects (high-speed rail and EV manufacturing).” 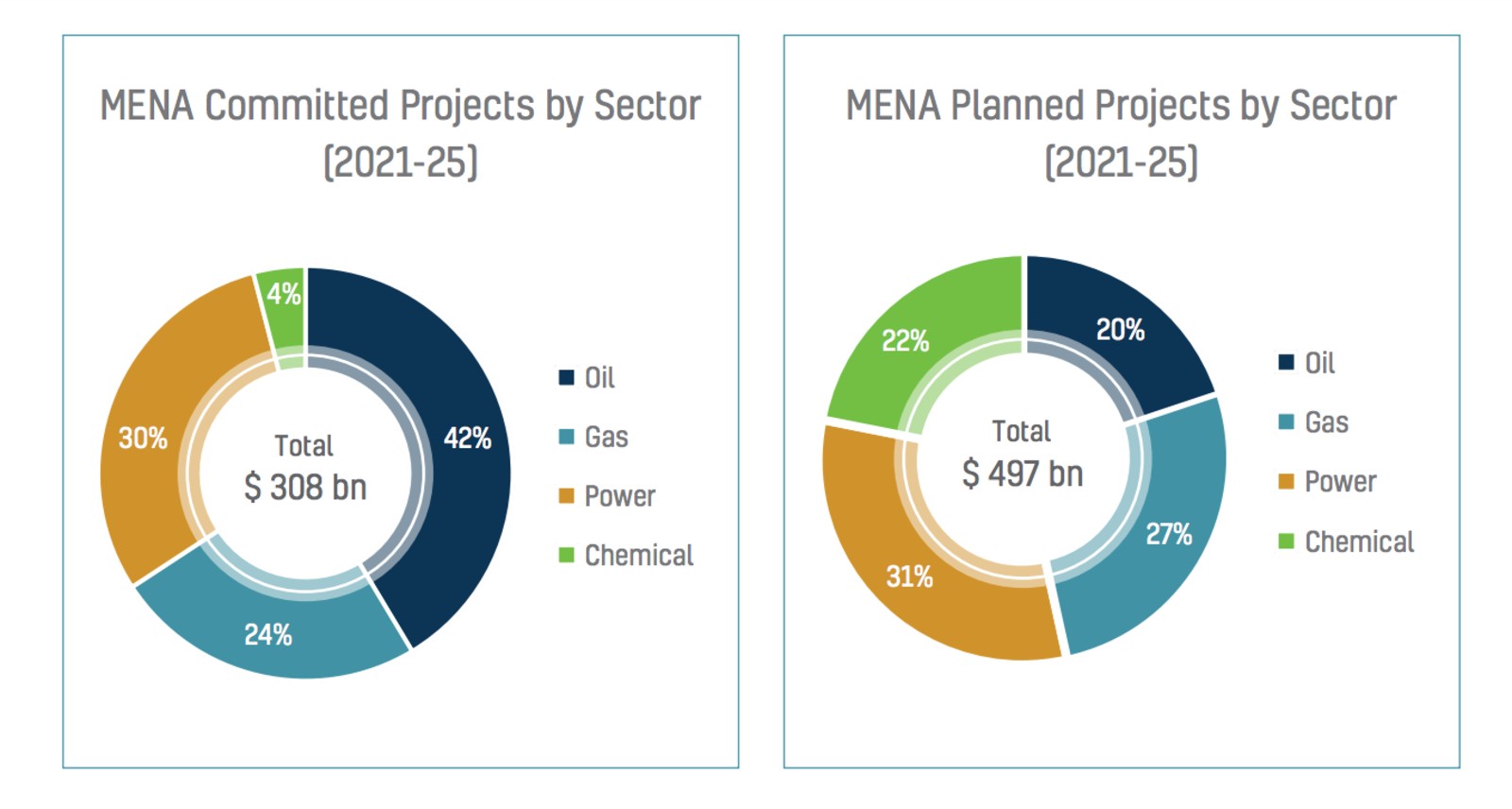 In terms of energy sectors, renewables are leading the pack in MENA: Power infrastructure will receive the largest share of energy financing, with planned and committed projects accounting for a total of USD 250 bn by 2025 (USD 175 bn of which is planned). Of that amount, some 40% will be funding renewable energy projects which are expected to add some 3 GW of solar energy across the region by the end of 2021, doubling last year’s production. Over the next five years, Apicorp sees 20 GW of solar energy coming online in the region. Although renewables still face “intermittency” and there is a “lack of utility-grade grid storage solutions,” meaning fossil fuels and nuclear power will continue to be staples in MENA’s energy mix, Jordan, Morocco, and Egypt (albeit “to a lesser extent”) are on track to meeting their renewables targets, Apicorp says.

In Egypt, our renewables ambitions “remain high” but the sector is being held back by regulatory issues, says Apicorp. Renewables in Egypt “still await the resolution of regulatory issues related to its stalled wheeling scheme and the unbundling of its power market.” Our total installed renewables (including solar and wind) capacity currently stands at 2.3 GW, with another “213 MW of solar PV IPP projects under construction, one 250 MW wind IPP project under construction, and 120 MW of wind capacity,” which the New and Renewable Energy Authority (NREA) is building. Further down the pipeline, Egypt has another 2 GW of wind and 1 GW of solar PV projects set to be added to our capacity.

Planned petrochemical investments are also on the up and up, with planned petrochem investments through 2025 coming in at USD 109 bn, up USD 14.2 bn from last year’s five-year outlook. On the flipside, committed investments are down by USD 7.7 bn to USD 12.5 bn, largely because several mega projects — including the Egyptian Refining Company’s Mostorod refinery — were closed out in 2020.

Egypt is the “regional leader” as far as committed petrochemical investments go, with Iran and Saudi Arabia in second and third places. Our placement, Apicorp says, is “owed to its drive to localize its specialty chemical industries and feedstocks import substitution.”

Natural gas isn’t doing as hot: Committed natural gas investments for 2021-2025 are a bit lower than the 2020-2024 period, coming in at USD 75 bn (down from USD 84.5 bn). Apicorp attributes this dip to caution stemming from natural gas oversupply and the completion of several natural gas megaprojects in its portfolio in 2020. The bank sees planned investments in the sub-sector remaining essentially stable at USD 133 bn over the next five years. Qatar, Saudi Arabia and Iraq-based projects will be receiving the bulk of the USD 208 bn allotment which is expected to help position Saudi Arabia as a blue hydrogen net-exporter.