Marine-plastic pollution is growing, and Egypt is a major contributor on a global scale 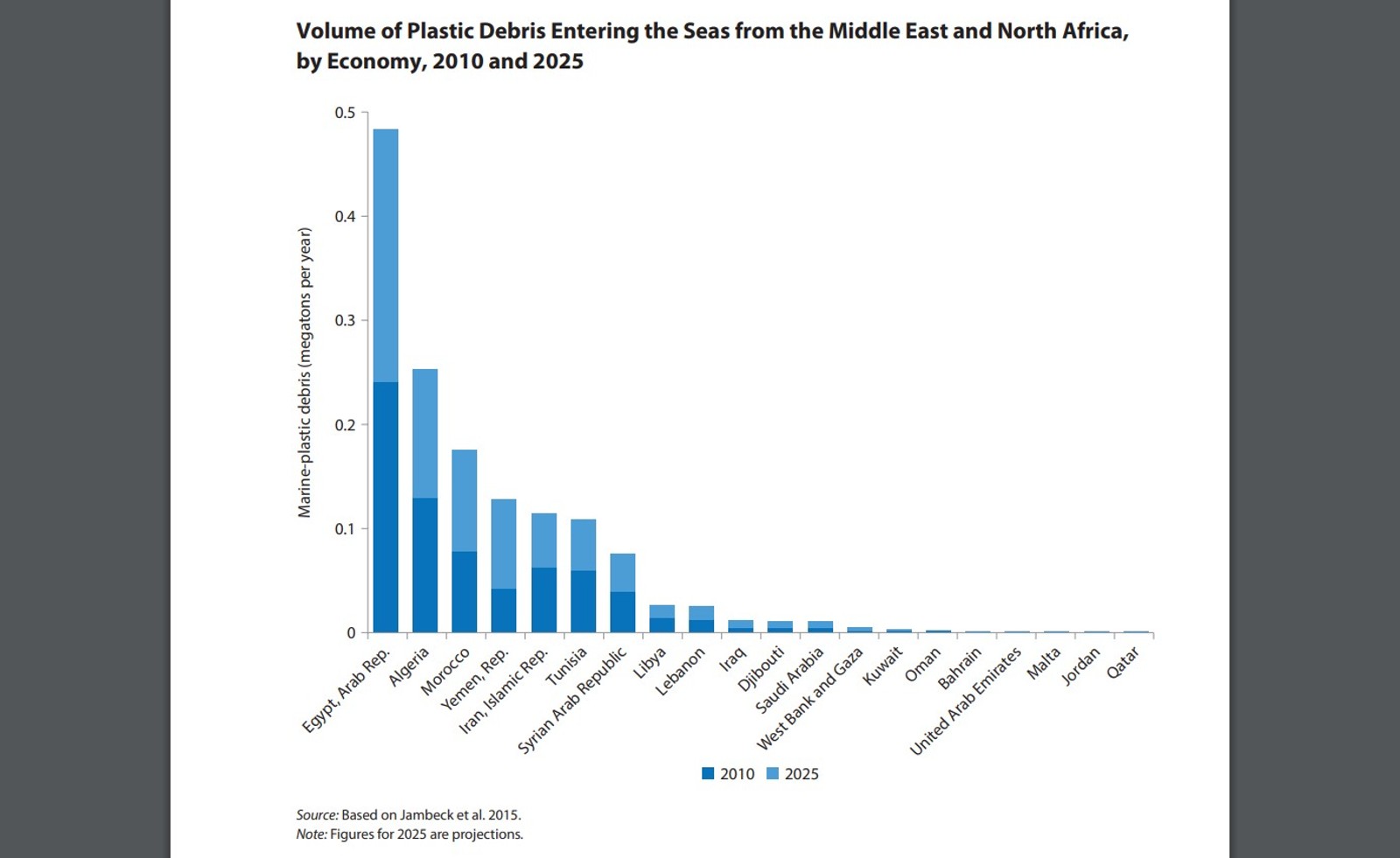 Marine-plastic pollution is growing, and Egypt has a lot to do with it: Throughout the world, the sight of plastic bags floating in our seas and oceans has become all too familiar. But in Egypt, our levels of marine-plastic waste pollution are the highest in the region and set to continue soaring, even though our per capita plastic waste generation is among the region’s lowest, according to a newly-released World Bank report (pdf). So how’s all this plastic ending up in our water? It’s mainly down to poor waste management, the World Bank argues, though the cheap production of single-use plastics doesn’t help.

Regionally, Egypt tops the charts in marine-plastic pollution: Egypt is the MENA region’s biggest marine-plastic polluting country, and the seventh-biggest in the world. According to 2010 data cited in the report — the most recent available — Egypt alone accounted for 3% of the discharge of plastic waste into the world’s oceans and seas, with regional peers Algeria contributing 1.6% and Morocco 1%.

And it’s only set to grow: By 2025, levels of Egypt’s plastic waste entering marine spaces are set to have doubled from 2010, and will be almost double those of Algeria — the second highest regional contributor to marine-plastic waste, the report shows.

What kind of plastic pollution are we talking about? The kind you can see, and the kind you can’t: Macroplastics — in the form of bags, food containers, sweet wrappers, or toys — make up the biggest portion of marine-plastic pollution, accounting for roughly 94% of all plastic items entering the Mediterranean each year. But global levels of microplastics — which currently consist largely of dust from tire abrasion, textiles, microbeads and production pellets — are set to double by 2050 from 2020 levels, as plastic material in the environment is slowly ground down into smaller pieces.

The Med is a plastic pollution hotspot: The Mediterranean is one of the most plastic-polluted seas globally, containing some 7% of the world’s marine-debris microplastics, despite holding just 1% of the world’s water. Every year, some 150k-500k tons of macroplastics and 70k-130k tons of microplastics pour into the Med, bringing the total quantity to an estimated 1.1 mn tonnes as of 2020, according to data cited in the report.

And Egypt is by far the biggest contributor: Egypt is responsible for a third of all plastic that enters the Mediterranean, with Turkey contributing 16.4%, Italy 10.7% and Algeria 5.9%.

Meanwhile, total levels of waste and plastic waste are expected to grow in MENA: Total waste generation in MENA is expected to double to 255 mn tons from 129 mn tons by 2050. Plastic waste constitutes some 12% of the region’s total waste, and this share is expected to increase as income levels rise.

Egypt’s plastic waste generation per capita is actually among the region’s lowest: According to 2016 data — the most recent available — Egypt generates approximately 0.7kg of plastic waste per person per day, putting us on the lower end of the regional spectrum for waste generation — out of 20 countries in the region, we’re number 14. This compares to 0.3 kg for residents in high-income GCC countries like Kuwait and the UAE, and those in Morocco, Syria and Yemen who generate less than 0.05 kg.

This is a sign that Egypt’s high levels of marine-plastic pollution are largely driven by poor waste management: The report identifies poor waste management as the major reason for plastic leakage in the Mediterranean. More than two-thirds of Egypt’s total solid waste is mismanaged — burned, disposed of as litter or left in uncontrolled dump sites — compared to 53% in MENA and just 10% in Bahrain and 8% in Saudi Arabia.

Along with our lack of formal recycling mechanisms: Out of 18 MENA countries surveyed, Egypt ranks 15th in terms of the share of municipal solid waste it recycles at just 3%, the report says.

But our waste management system isn’t the only reason we’re (literally) swimming in plastic: Single-use plastics are also cheaper to produce than eco-friendly alternatives. Throughout MENA, prices of single-use plastics are significantly lower than greener alternatives, with plastic cups costing one-third or less what biodegradable cups cost. Fuel subsidies play a key role in this, making it cheaper and easier for companies to produce plastics, the report says.

The plastic waste clogging up our seas has grave health consequences: A 2019 Australian study found that the average person could be ingesting as much as 5 grams of plastic every week, while studies published in 2021 estimate that we might ingest up to 100k microplastic specks each day. Accumulated microplastics in our bodies can lead to inflammation, tissue damage, cell death, cancer, or damage to our reproductive systems, preliminary studies indicate.

And economic implications: Across the Mediterranean, plastic pollution causes the tourism, industrial and fishing industries to suffer an estimated EUR 641 mn in losses every year, according to a 2019 study.

It’s still too early to know whether we’re making headway on this yet: Egypt’s new Waste Management Act sets an ambitious framework for waste collection, disposal and recycling, but it remains unclear how enforceable it is, and whether it will really be more inclusive of the informal economy remains to be seen. The government plans to integrate the Zabbaleen into the system as employees working under private sector contractors, but they aren’t too happy about the planned arrangement. And much touted initiatives like waste-to-energy projects have struggled to get off the ground.