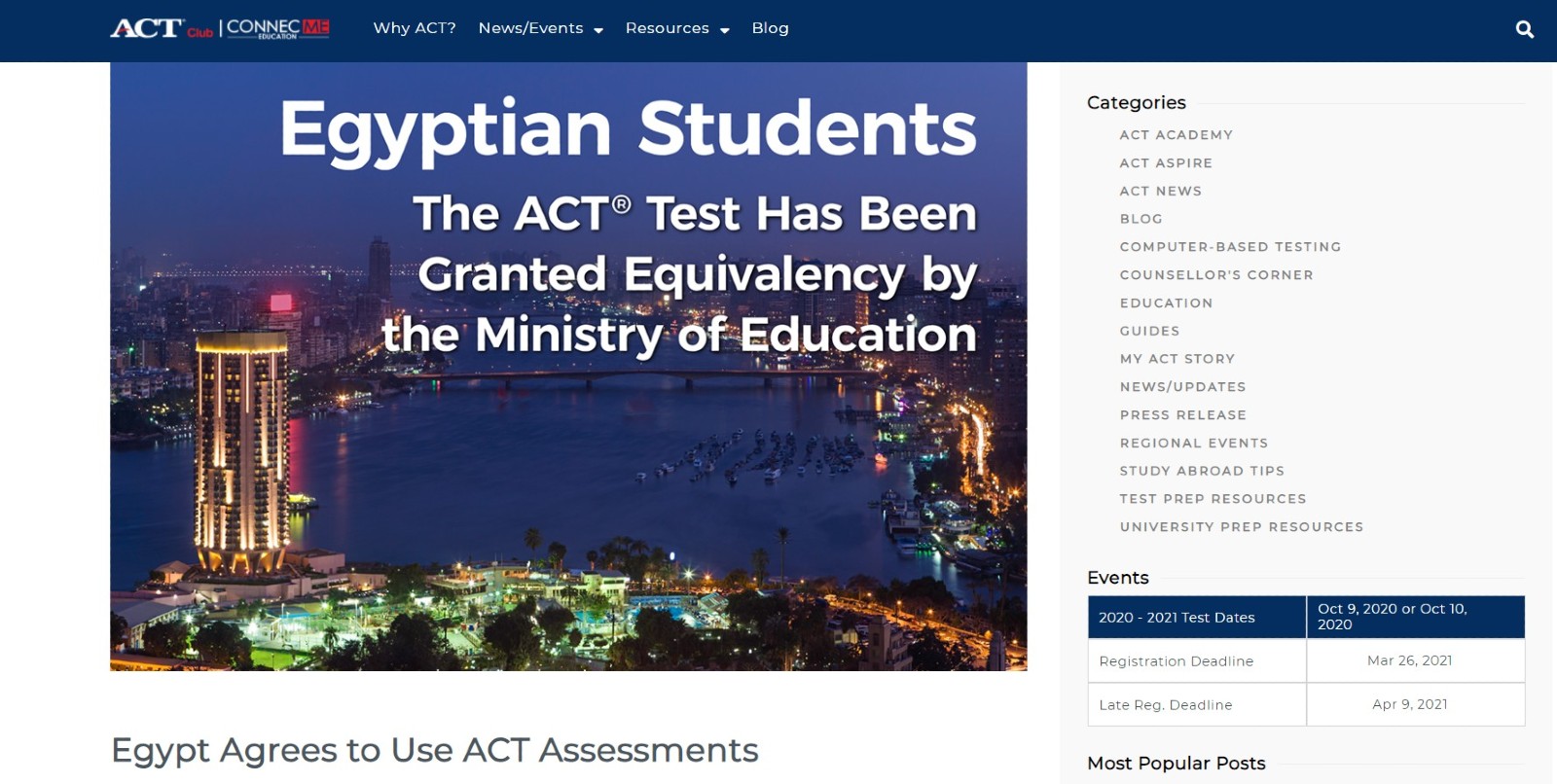 But life in Egypt goes on without it: These cancellations have driven an increasing number of students towards the ACT in Egypt, along with the homegrown Egyptian Scholastic Test (EST). While some question whether the SATs will remain canceled until June 2021 (as recently stated), some see this as the beginning of the departure away from the SATs, as some universities in the US have.

Background: SATs were canceled indefinitely in Egypt at the beginning of September due to “persistent test security incidents,” according to nonprofit organization College Board, which develops and administers them. The SATs have long been required examinations for students applying for undergraduate university admission and scholarships, particularly in the US.

Globally, SAT security breaches are nothing new: CollegeBoard has had to call off international administrations of their exams repeatedly due to security issues, including in Egypt, Morocco and Saudi Arabia last year.

Who was most directly impacted by the cancellations? Some 60k Egyptian students follow the American Diploma system, and a minimum SAT score is an entry requirement for them to attend Egyptian universities. For private universities, this ranges from 730–950 for the latest version of the SATs. Public universities require a minimum of 1050.

Beyond cancellations, schools have been misusing the SAT: Some second and third-tier schools profit from the lucrative business model around SAT preparation, says Ciotti. “Several schools say they teach the ‘SAT curriculum.’ I’ve even heard schools say they’re accredited by CollegeBoard or the SAT, which isn’t possible. CollegeBoard isn’t an accrediting agency, and the SAT isn’t a curriculum: it’s a test.” There are schools that make a lot of money off such misconceptions, he says. The college prep industry also taps into the demand for students seeking support to enter university, with some 91 firms currently operational in Cairo — most of which are for-profit businesses, we recently reported.

All this is driving more students to take the ACT: There’s been a notable increase in Egyptian students taking the ACT, say multiple sources. “What American Diploma students are applying to university with now is the ACT,” says El Kalla. Universities in Egypt require an external standardized exam for entry, and ultimately the SAT and ACT serve the same purpose, says Allison Fleet, El Alsson American School principal.

The SAT and ACT are comparable in structure and cost: Each takes approximately three hours to complete and consists of questions in different subject areas as well as an optional essay. Sitting the SAT currently costs USD 52 or USD 68, with regional fees of USD 47 for MENA countries. The ACT costs international students USD 150 or USD 166.50. The ACT isn’t better than the SAT, says Bob Schaeffer, interim Executive Director of Fair Test: “It’s a somewhat different test structure, but is also a fast-paced, multiple choice guessing game.”

But being an online exam gives the ACT the edge in security: Because the ACT shifted to computerized testing for students outside the US a year and a half ago, test leaks are much harder, says Schaeffer.

The EST was also quickly set up as an alternative to the SAT for university entry in Egypt: The EST is an electronic test that assesses students’ reading, writing and math, and measures their readiness to enter university, according to its website. It’s delivered by the Education Ministry in collaboration with Pearson, and costs either USD 100 or USD 115. It was quickly designed and launched after the SAT cancellations, and enrollment started in late September.

As a very new test — and one that’s only valid in Egypt — much is still unknown about the EST, say multiple sources. “The EST is still quite a big question mark in our minds because we haven’t heard a lot about it and none of our students have taken it yet,” says Fleet.

But it’s seen in a positive light, offering Egyptian students more choice and control: The EST will be useful for American Diploma students looking specifically for local education at local universities, says El Kalla. Both he and Abdalla see the EST as a useful way for Egypt to avoid complete reliance on an external system it has no control over.

Gov’t temporarily replaced SAT with the ACT and EST this year: Because of the cancellation, the Education Ministry started promoting the use of the ACT as a university qualifier, Minister Tarek Shawki said last month. This is a temporary solution, with the ACT adopted because of its similarity to the SAT, says Mahmoud Hassouna, advisor to the Education Minister. It’s too soon to know if this will continue next year, but if cancellations continue it isn’t off the table, he says.

Meanwhile, Egyptian universities now accept either the ACT or the SAT to fulfill their mandatory standardized test requirement for American Diploma students, say sources. “At the end of the day, if there’s a verifiable standard test result that I can take, I'll take it,” says El Kalla. While some — like AUC — continue to accept only the SAT or ACT, others — like AASTMT — will also accept the EST, representatives tell Enterprise.

…With gov’t backing: The Higher Education Ministry has instructed private universities to continue reserving places for American Diploma students until November to give them the chance to take alternative exams, says Ashraf el Shihy, President of the Egyptian Chinese University.

While the US seems to be moving away from standardized tests as mandatory university admissions criteria. Over two dozen top US universities announced in the spring that the SAT and ACT would be optional for applicants seeking to enroll in 2021, according to the New York Times. Now over 1,250 accredited four-year colleges and universities in the US are test optional. This could push more students from AIS and other top-tier schools to study overseas this year, says AIS Director Kapono Ciotti.

Though the CollegeBoard may be working on a solution to maintain the SAT’s position: Egypt is too big a market for the SATs to be paused for two years, believes Ciotti. He doubts that the SATs will be out of the picture long enough for a viable alternative to take over. “I think the CollegeBoard will expedite a solution for next year, although this hasn’t been promised to me or anyone else,” he says. Still, the SAT and ACT are like Coca-Cola and Pepsi, according to Schaeffer. “Globally, they’re always fighting for market share.”

…which for now is still a strong one: The SAT is much more established in Egypt, having been here for 20 years while the ACT is only in its third, says Schutz’s Massimo Laterza. “I don’t know what the ACT testing capacity is, but it will have to grow quickly to meet the current demand.” Furthermore, the SAT is much more widely recognized internationally, says Ciotti.

How the SAT could continue in Egypt while maintaining its integrity is one question. Whether it will retain its market dominance is another. The College Board has every right to pause the SAT for the sake of academic integrity, say sources, but it remains to be seen if schools and universities in Egypt will want to rely so heavily on SATs in the future, when alternatives like the ACT and EST exist. It also raises the broader question of whether a move away from standardized testing — as we’re witnessing in US university admissions — might be on the cards.