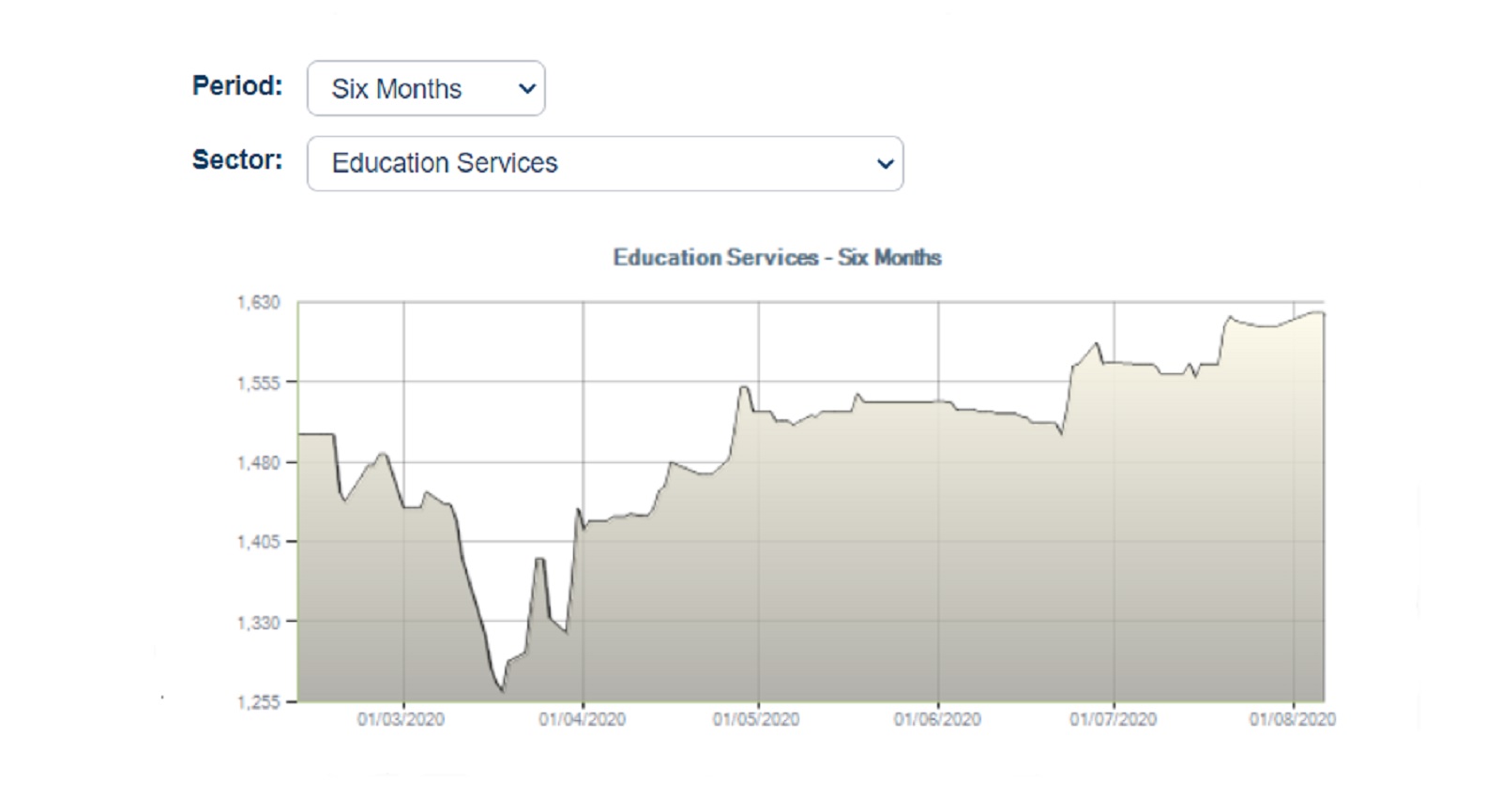 Education stocks have weathered the covid-19 storm in equity markets that has dragged down other industries, underscoring its position as a defensive sector even in the face of a global pandemic. The industry’s performance over the past five months confirms the hypothesis we put out in March that it was on track to be resilient. At the time, the EGX was in decline, but education was falling at just half the rate of the broader market.

Which education companies are listed on the EGX? CIRA, which operates K-12 schools Mavericks and Futures, as well as Badr University, is the sector heavyweight. There are also two other companies that are listed under the EGX’s education services industry: Cairo for Educational Services — a subsidiary of CIRA — and Suez Canal Company for Technology Settling (SCTS), which owns and operates the Sixth of October University.

As a whole, equity markets saw a steep sell-off in March, but traditional defensive plays, including education, were not hit as severely, Pharos Holding equities analyst Diyar Hozaien explained to Enterprise. “Education proved in this crisis that it is indeed a very resilient sector. It’s just not a service that consumers will stop demanding because of current circumstances — even if these circumstances are a pandemic,” she said.

On a year-to-date basis, the education sector has outperformed the benchmark EGX30. The index is down 21.5% YTD, whereas education services are now up 5.22% YTD.

The sector's performance has bounced back from a drop in mid-March and is now inching back up towards its December 2019 peak. At the beginning of the covid-19 market meltdown in late February and early March, it was down 6.68% YTD on the EGX30. Now, education services are up 5.22% YTD. By way of comparison, banks — which are traditionally strong market performers — are down 19.43% since the beginning of the year.

The only sectors in the green on the EGX on a YTD basis other than education: Telecoms, contracting and construction engineering, textiles, and paper packaging.

The drop in March was limited both in depth and duration and came directly after schools were instructed by the government to suspend in-person teaching and move to remote learning platforms, CIRA CEO Mohamed El Kalla explained to Enterprise. Investors were concerned about education providers’ ability to quickly and effectively deliver remote learning services, and those that succeeded in that area bounced back immediately, El Kalla said. “CIRA is a classic example of that: Within 72 hours of the government announcing the move to remote learning, all of our classrooms were fully moved to our online platform.” El Kalla chalked up the concerns at the time to a “lack of clarity,” saying investors were unsure if providers would rise to the challenge — and also had no outlook on what the following few months would look like. 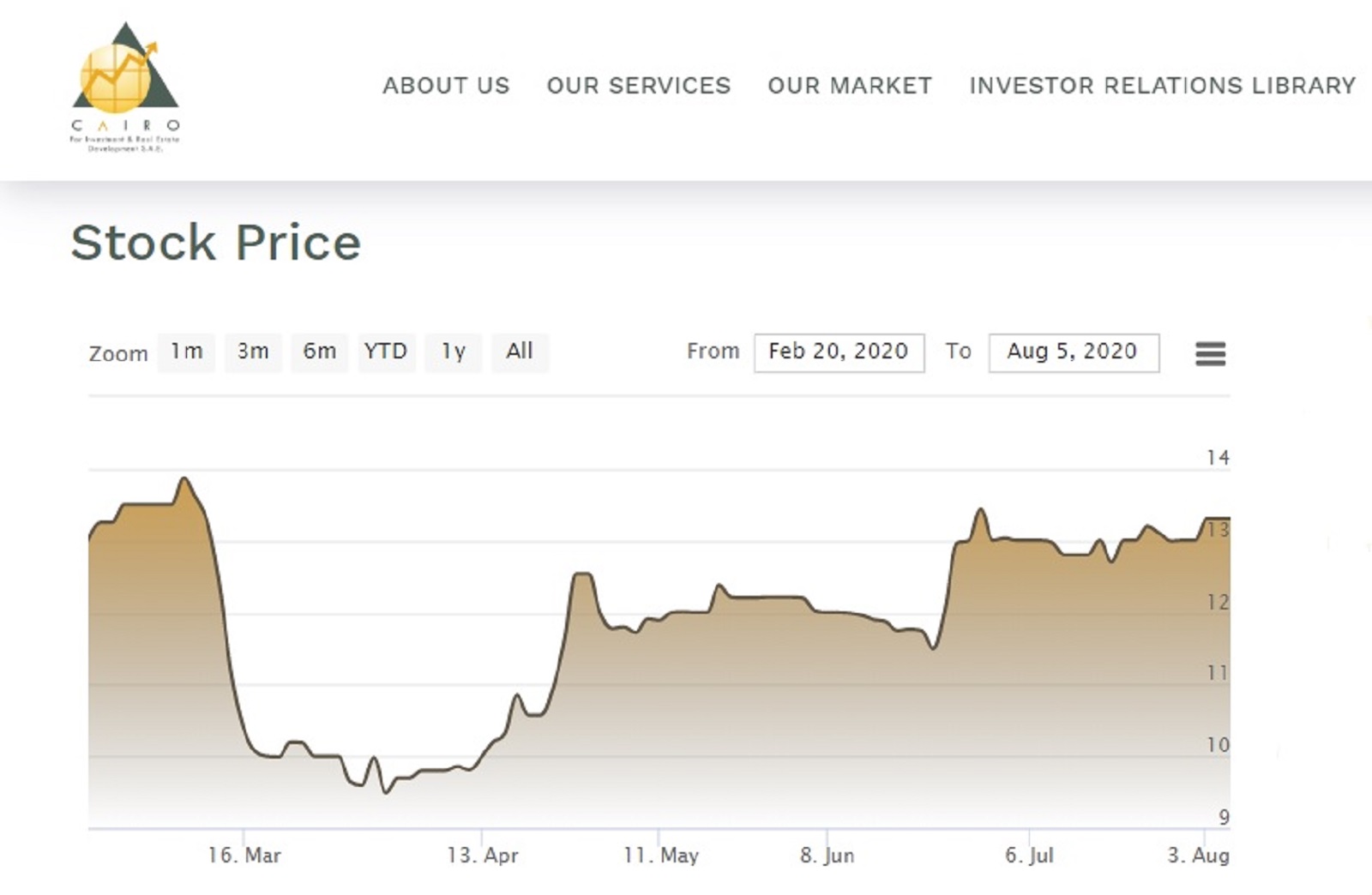 And as for individual education service providers: CIRA’s shares saw what El Kalla describes as “low turbulence” in March. CIRA shares dipped from EGP 13.87 on 4 March to a low of EGP 9.49 on 31 March. Since then, the company’s shares have rallied, closing at EGP 13.30 apiece as of Thursday, when it was last traded. SCTS shares dropped to EGP 26.53 on 17 March from an all-time high of EGP 47.02 on 11 December 2019. The company’s shares have been rising on low trading volumes since March, closing at EGP 40.00 on 27 July — the last day the stock saw any trading activity. CAED shares have seen more ups and downs than its industry peers on the EGX: The company’s share price dropped to EGP 8.20 apiece on 16 March and has since continued to swing to highs and lows, before settling at EGP 9.50 on 22 July — the last day on which the stock traded hands.

Even with the limited bout of turbulence, El Kalla says that investor sentiment remained strong throughout the pandemic. “Investors have a very growth-focused mindset and they know that the population is growing, which means demand for education services will continue to grow as well.” The limited concerns that were there in mid-March were quickly quelled once schools showed they were able to handle the transition. For CIRA, that was helped by the fact that they already had the necessary infrastructure in place from before the pandemic, noted Pharos’ Hozaien.

As you’d expect from a defensive play, CIRA has continued to perform well financially: In the first nine months of its fiscal year (September-May), CIRA reported a 32% y-o-y increase in net profit to EGP 330.4 mn, while its net revenues soared 54% y-o-y during the period, coming in at EGP 991.9 mn. CIRA also reported that its new projects are all on track to be completed on schedule, after facing minor delays at the outset of the pandemic.

Some education service providers faced other hurdles in the early days of the shift to online learning, including disputes with parents about tuition fees and payments for services the schools were no longer providing, Hozaien told Enterprise. However, these were not reflected in investor sentiment on the sector and did not result in a dip in equity performance, she said. We dove into the dispute in June.

Investors have more clarity as we head into the new academic year. Schools have announced that they will be pushing ahead with a blended learning model — and they have proven their ability to effectively deliver using that model, El Kalla says. Those that initially struggled have had the summer months to adjust and ensure that they will be ready once they open their doors for the new year.

If anything, the shift to blended learning models has actually been a “net positive” for the education industry, GEMS CEO Ahmed Wahby told Enterprise. “Because schools are splitting up classrooms for a rotational system, there are fewer students per classroom and therefore more individual attention.” This has also helped to bolster a positive outlook for investors on the sector, he said.

Your top five education stories of the week: