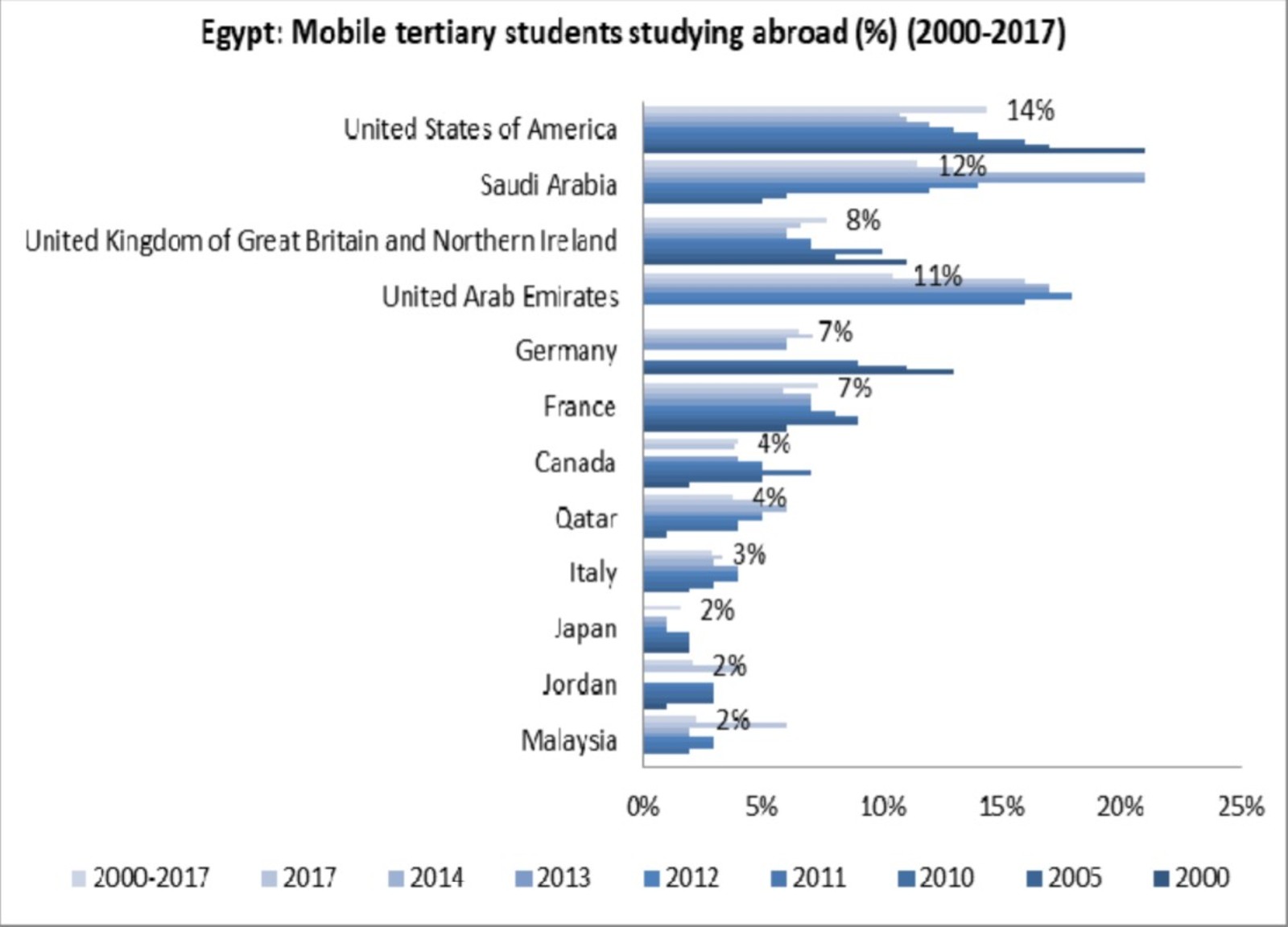 As an increasing number of Egyptians study abroad, reform is underway to keep them here: Egypt’s students are looking to study in foreign universities at ever-increasing rates, taking much-needed FX out of the country and likely contributing to a brain drain. To reduce the depletion of FX and loss of human capital, the Higher Education Ministry is now working to provide quality in-country alternatives designed to retain more domestic students and attract more international students, says ministry spokesman Hossam Abdel Ghaffar. The approach has worked in countries not traditionally renowned for higher education, including Qatar and the UAE. Will it work for Egypt too?

The c.20k Egyptians currently studying abroad are spending the equivalent of EGP 20 bn attending university overseas, Higher Education Minister Khaled Abdel Ghaffar said in a recent statement. The total number of Egyptians who study overseas has almost quadrupled in the past two decades, growing from 8,802 in 2000 to 34,922 in 2017-2018, according to UNESCO data (pdf).

Many students at Egypt’s top international schools aspire to an overseas university education in OECD countries from a young age: Almost 100% of the Cairo American College’s graduates attend university overseas, with over 50% studying in the US, many in Canada, the United Kingdom, and Europe, and a few in Australia and Asia, says school head Jared Harris. Some 70% of American International School students go overseas for university every year, with most attending universities in Europe, says Director Kapono Ciotti. And anything from a third to two-thirds of Schutz American School’s students attend university overseas every year, says Assistant Head of School Massimo Laterza. Ambitious, academically-inclined families will start conversations about which universities to apply to as early as the ninth or tenth grades, with parents deeply involved in the decision, say Ciotti and Laterza.

Among universities in Egypt, only AUC and GUC are prestigious for these students, says Ciotti. Some 25% of the Schutz students who attend university in Egypt go to AUC, with the Arab Academy for Science Technology & Maritime Transport also having relatively high attendance rate, usually for parents who either prefer their children don’t travel far or who face financial constraints, says Laterza.

Some top overseas destinations like the GCC aren’t traditionally renowned for higher education: Roughly one-third of Egyptian students who study overseas go to the UAE and Saudi Arabia, with Qatar and Malaysia also having high representation among non-OECD countries, according to a 2019 World Education Services report.

The growth of countries like Malaysia as educational hubs shows that in-country internationalization both attracts overseas learners and retains domestic students: Internationalization offers more domestic educational options for citizens through transnational education programs, while attracting international students. The country had a total of 563 accredited foreign programs in 2012, with the top three providers being the UK, Australia and the United States. In Malaysia’s case, this was part of a plan to transform the country into a developed knowledge-based economy, in response to the 2008 financial crisis.

For Egypt, government policy has also been a driver in students looking abroad: The Egyptian government has a long history (pdf) of providing scholarships for students to attend universities overseas as part of importing knowledge and skills — particularly focused on scientific advancement. From 2007–2012, the yearly budget for state-financed scholarships for doctoral study was approximately USD 80 mn.

But encouraging more students to study abroad appears to be contributing to the brain drain. Gallup research found that some 77% of 5k Egyptian diaspora members surveyed want to continue living in their current residential location, with only 9% wanting to return to Egypt.

Does Egypt have the funding and resources to deliver? It’s upping its spending on higher education: GCC countries that have become educational hubs have done so through significant investments in education. In its 2019 budget, the Saudi government allocated USD 51 bn for education, up from USD 35 bn in 2011, representing 7% percent of total GDP. The government will invest EGP 424 bn (c.USD 26 bn) in education and scientific research in the current fiscal year, and according to Abdel Ghaffar is currently spending EGP 90 bn on higher education alone.

But private investment is still key to building capacity: Naturally, this spending will need to be augmented with private sector investment in quality and new facilities for the plan to properly take root. We’re seeing some progress on that front, with investments in three recently-established international branch campuses exceeding EGP 2 bn. Private sector players appear to have maintained capex spending on university projects during covid-19. It has yet to be seen if these policies will encourage them to get on the same page as far as internationalizing education is concerned.