What does AI mean for business, and what’s the best way forward to build the competence needed? 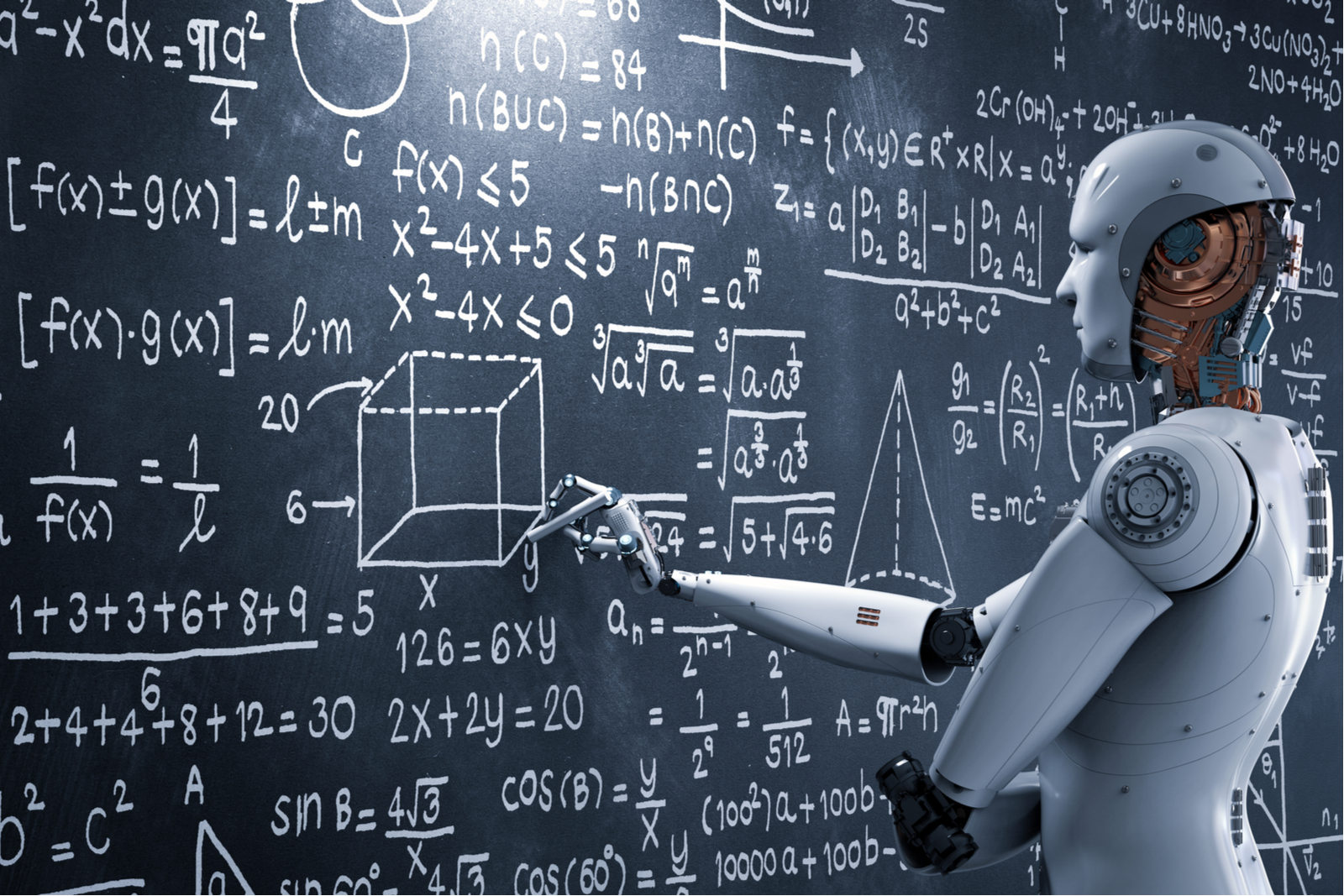 What does AI mean for business — and what’s the best way to build competence in the field? According to a recent PwC report, AI can contribute as much as USD 16 tn to global GDP by 2030. Deploying AI can help a company increase sales, counter fraud, save costs, build actionable market insights and more. In the past, only large corporations were able to invest in this. But the landscape is rapidly changing, and we are now starting to see younger companies adopting AI as computing power is becoming much cheaper.

So, we need to teach AI — but what exactly does that mean? Teaching AI 'systems' is a more specific way to describe the field as a taught subject. The method involves bringing those with any educational background up to speed on research in AI and its sub-categories. Today, the most popular sub-category of AI is machine learning, which involves getting a computer to look at giant sets of data and act on them in ways only humans can. Those datasets are what people liberally call Big Data, which is to AI what a textbook is to an aspiring learner. AI and Big Data therefore go hand in hand.

Egypt is working on catching up with the rest of the world, particularly in public universities, which in some ways appear ahead of their private counterparts by opening AI-specialized departments. Academics we spoke to believe those departments would provide focus, but startups and larger companies don’t seem to be as keen. That’s because even if AI learning becomes widespread in Egypt, the country still suffers from a chronic issue with retaining skilled computer engineers and programmers. There’s also the question of whether universities (as they’re presently constituted) are the best place to teach base-level AI and other coding skills generally given the accessibility of online education.

The ongoing drive to introduce more AI into higher education has government backing, which was made evident when President Abdel Fattah El Sisi announced during the recent World Youth Forum that we will soon see a number of new universities or departments specialized in “advanced sciences.” Those new facilities will be set up through twinning programs with universities abroad. The first specialized AI department has already opened its doors this academic year in Kafr Sheikh University, with Menoufia University scheduled to follow suit. Both Kafr El Sheikh and Menoufia have sizable populations, and graduated some 8.4k and 13.6k students in 2018, CAPMAS data shows.

AI is taught as a module at other public institutions, including at Cairo, Ain Shams, and Alexandria universities — but it’s not a standalone degree. It is also a credit-earning subject in Helwan, Mansoura, and Zagazig universities, among others.

The government is also doling out financial incentives for course-based learning: Next Technology Leaders (NTL), an initiative supported by the CIT Ministry’s ITIDA, refunds Egyptians who study and pass skill-based MOOCs — or massive online open courses, Hisham El Shishini, an independent tech consultant who sits on the steering committee of the ministry’s IT Academia Collaboration (ITAC), told us. The initiative is administered by ITIDA’s Technology, Innovation, and Entrepreneurship Center, and tracks learners in real time (pictured below). There are currently some 4.2k graduates and 1.4k active learners from Aswan to Marsa Matrouh. Learners can choose from 42 different tracks or “nano-degrees” from app development to machine learning. Those courses are offered by top-tier learning platforms Coursera, Udacity, and edX.

This all comes as part of a wider AI strategy: The higher education and CIT ministries outlined the broad strokes of a national AI strategy last September, with education as one of its key pillars. A steering committee to monitor the strategy’s implementation was established by a cabinet decree shortly after. There have also been talks in December of formulating a pan-Arab strategy for AI. 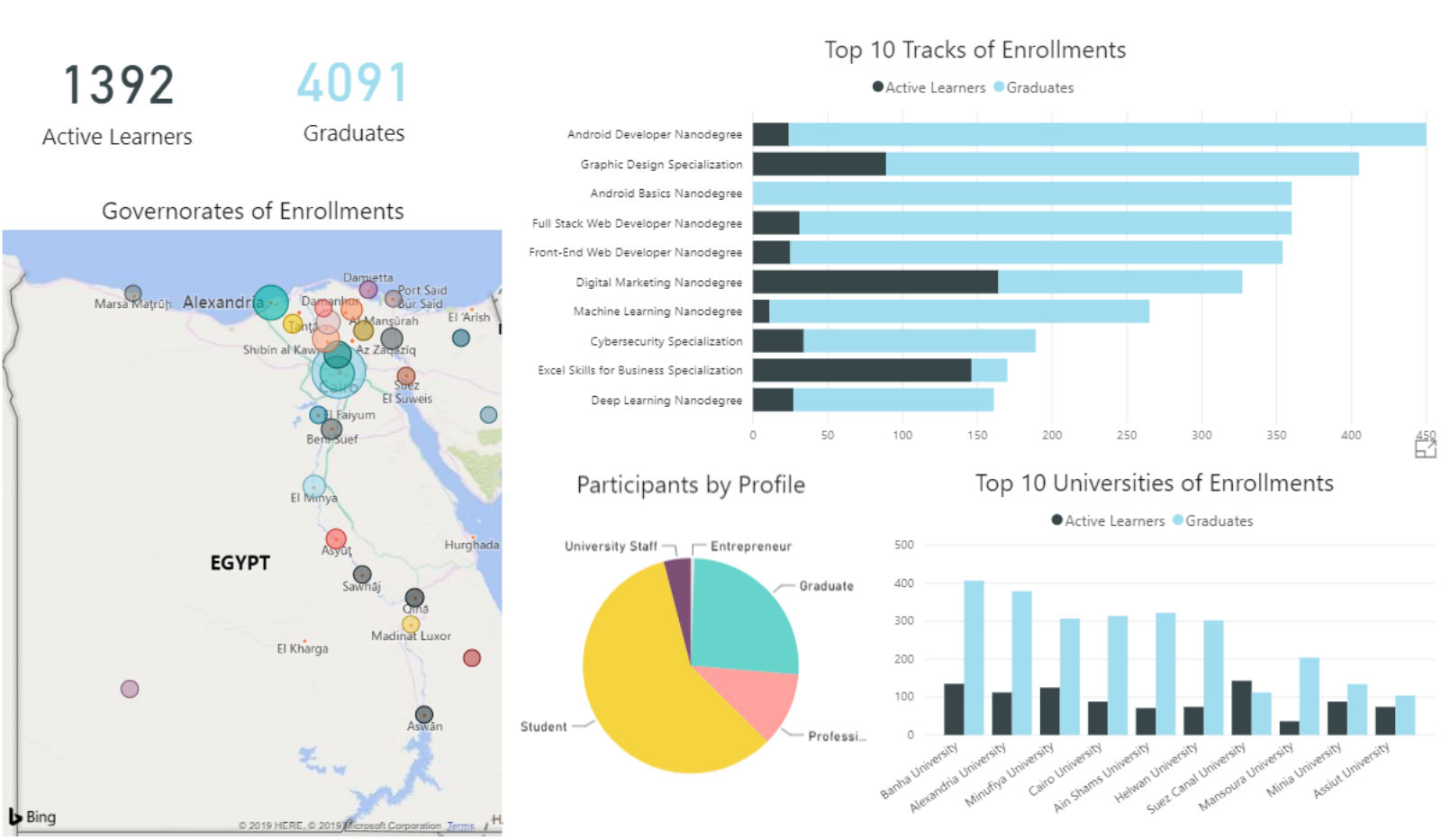 While the public sector is taking the lead, where do private institutions stand? A standalone data science undergraduate degree has just recently opened its doors at the American University in Cairo (AUC). We had a primer about the program last April. Besides data science, which touches on machine learning, AUC’s Information Technology school also teaches the foundations of AI, but we have yet to hear about an AI-specialized deck.

Also edging forward: BUE, AAST, ZewailU: Others leading the pack include the British University in Cairo (BUE), which gives its informatics students the option to specialize in AI toward their third year. Close to 140 students currently in their third year will be presented with a choice to specialize in AI before they graduate in 2021, department dean Omar Karam told Enterprise. Elsewhere, Arab Academy for Science and Technology (AAST) assistant professor of electronics and communications Hassan El Dib co-founded Intelligent Systems Labs in 2018. The lab is focused on research in a subcategory of machine learning known as “deep learning,” but it also hosts regular workshops and seminars to teach aspiring AI learners in Alexandria about the field, El Dib tells us. Research-intensive Zewail University of Science and Technology, meanwhile, has an MSc course that draws on the expertise of both the informatics and mathematics faculties.

This all begs the question: Do we even really need AI-specialized departments? Global corporate giants like Apple, Google, and Netflix have begun crossing off four-year degrees as a prerequisite for hiring. They want people who can get jobs done, “with or without a degree,” says Business Insider.

Egypt isn’t much different: Large corporations in Egypt are increasingly offering internships to students from different backgrounds, and often hiring based entirely on internship performance, says El Shishini, who was chief scientist at IBM until 2016. This tells us that they’re starting to care less about university degrees, and more about the execution of day-to-day jobs, he told us.

And in startup-verse, degrees are already immaterial: We’ve spoken with senior executives from high-profile AI startup Elves, who all believe in the Peter Thiel approach of hiring the right fit, regardless of college degrees. “It’s about the skills, and intelligence to excel at those skills,” Elves CEO Karim El Sahy told us.

But our engineers are looking elsewhere: A key challenge the industry faces is to find and retain AI specialists — whoever educates them — who won’t pack their bags and head to the airport on graduation day, El Sahy, Elves’ CBO and co-founder Ahmed Kassem, and partner Abdel Rahman El Zoheiri all agree. AI specialists can easily be recruited in top tier markets such as Germany and the Netherlands because their skills are in high demand abroad. “If we increase the supply without addressing the brain drain problem, all we’re doing is funding Germany,” El Sahy adds.

What can be done? This is a task that can be shared by both the government and private employers. When asked about what they do to make their employees stay, Elves executives gave an answer that was nothing short of “everything.” They stressed the need to pay salaries that are competitive even by European standards, and offer a combination of other incentives — such as working remotely, stock options, and an appealing work environment. As for the government, having more programs like NTL can go a long way. Not only would they teach the necessary skill-set, but also build a database of AI specialists that private companies can then use to find talent and compensate them adequately.